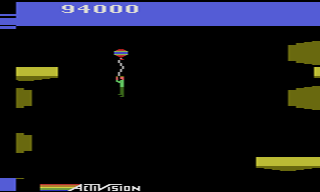 Watch Download (.bkm)
Author notes Discuss
6.07 / 10 Votes: 8
Pitfall II: Lost Caverns is a platforming video game originally released for the Atari 2600 in 1984. The sequel to the popular Pitfall!, it opens up the world into a free-roaming adventure instead of progressing on a linear path.
This run is different from the any% TAS in that it does everything necessary to achieve the maximum score. This means avoiding falling down pits (which decreases your score by 100 each time) and following a much longer route in order to obtain all items. This route allows the author to show off a glitch that spawns a balloon earlier than intended, which is used an additional time in this run to save 00:04.41 seconds over the previous run.
Published on 8/22/2014
Obsoletes:
A2600 Pitfall II: Lost Caverns "maximum score" by solarplex in 09:43.08

Emulator Version:
BizHawk 1.7.0
Webmasters, please don't link directly to the files. Link to this page or the front page instead.
Republication of movies from this site is only allowed under the following conditions:
Do not label them with speculations. If unsure, ask the site staff for details.