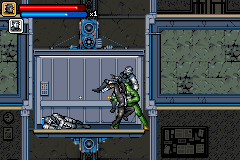 Watch Download (.vbm)
Author notes Discuss
6.71 / 10 Votes: 4
X-Men: The Official Game is based on the third X-Men film. The game lets you control either Wolverine, Colossus, Iceman or Nightcrawler through twenty-five stages of a traditional side-scrolling beat'em up platformer. You move through the levels usually to find the exit. The stages can scroll from left to right, top to bottom or are designed more like a labyrinth. Enemies are defeated using a variety of punches. The characters differ hereby in range and the damage they deal. Each character also has his own special attack and some character-specific abilities. For example, Colossus can smash certain materials while Wolverine regenerates his health over time.
In this TAS, the author makes extensive use of the teleport glitch in later stages in order to blaze through the game and defeat Master Mold in record time.
Published on 9/30/2014
See full publication history
Game:
X-Men: The Official Game
Genres:
Action
Platform

Emulator Version:
VBA-rr-v23.6 svn480
Webmasters, please don't link directly to the files. Link to this page or the front page instead.
Republication of movies from this site is only allowed under the following conditions:
Do not label them with speculations. If unsure, ask the site staff for details.