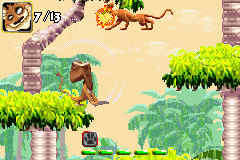 Watch Download (.vbm)
Author notes Discuss
6.67 / 10 Votes: 7
Based on the animated film from DreamWorks, Madagascar follows Alex, Marty, Melman and Gloria as they attempt to stop Marty from leaving New York's Central Park Zoo and accidentally wind up in Madagascar. As the game progresses, the animals develop new skills to help them explore the island, such as the stealth crawl, the sneeze jump, and the claw climb.
The game also features the ability to switch between up to four characters at any time. This enables a host of new routes and tricks like rapidly switching characters to prevent damage knockback and enable a triple jump.
In this run, CoolKirby and YoungJ1997lol utilize these tricks to speed through the movie's plot in under half an hour.
Published on 12/7/2014 12:00 AM
See full publication history
Game:
Madagascar
Genres:
Platformer

Emulator Version:
VBA24-M svn480
Webmasters, please don't link directly to the files. Link to this page or the front page instead.
Republication of movies from this site is only allowed under the following conditions:
Do not label them with speculations. If unsure, ask the site staff for details.