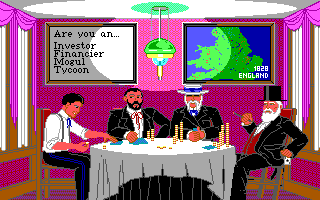 Watch Download (.jrsr)
Author notes Discuss
5.74 / 10 Votes: 13
Sid Meier's Railroad Tycoon is a simulation game developed by MPS Labs and published by Microprose in 1990. The goal of this game is to normally rack up as much money as possible by expanding the railroad empire across the land, building stations, buying trains, creating industries and fending off the competition, with a starting capital of £1 million, in order to retire with the highest job rank.
In this TAS, however, c-square loses as much money as possible on the highest speed setting, Turbo, and still manages to earn the highest rank thanks to an underflow, where the value wraps around to be +£32 million after losing money past £32'767'000, in just less than 40 seconds. One could say he crashed the economy by doing so.
Published on 3/1/2015
See full publication history
Game:
Sid Meier's Railroad Tycoon
Genres:
Strategy

Emulator Version:
JPC-rr 11.2
Webmasters, please don't link directly to the files. Link to this page or the front page instead.
Republication of movies from this site is only allowed under the following conditions:
Do not label them with speculations. If unsure, ask the site staff for details.