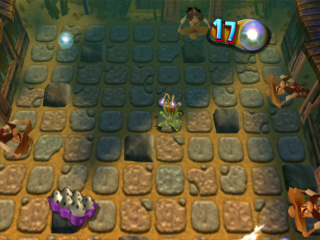 Watch Download (.dtm)
Author notes Discuss
6.17 / 10 Votes: 8
Zapper: One Wicked Cricket! is a platform game that was released for the Xbox, PS2, GBA, PC and GameCube in 2002 in North America. In this game, Zapper the Cricket has to collect 6 eggs in each of 20 levels in order to save his brother from Maggie, an evil magpie. The concept behind its gameplay is similar to that of Frogger.
In this fast-paced TAS, Amateseru and tomiy hop madly through the levels required to beat the game in 16 minutes and 47.77 seconds.
Published on 8/8/2015
See full publication history
Game:
Zapper: One Wicked Cricket!
Genres:
Action
Platform

Emulator Version:
Dolphin 4.0-6052
Webmasters, please don't link directly to the files. Link to this page or the front page instead.
Republication of movies from this site is only allowed under the following conditions:
Do not label them with speculations. If unsure, ask the site staff for details.