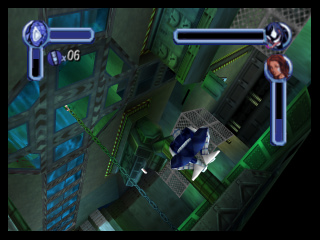 Watch Download (.bk2)
Author notes Discuss
6.96 / 10 Votes: 13.5
Spider-Man is the first 3D game to star the popular web-slinger. It is loosely based on Spider-Man: The Animated Series and Spider-Man Unlimited and features some of the voice cast from each and similar character designs.
Peter Parker is attending a demonstration of the reformed Dr. Otto Octavius's new invention when an imposter Spider-Man steals the device. Spider-Man must work to clear his name and uncover the sinister motives behind the device's theft.
Using various techniques, most prominently out of bound clips, arandomgameTASer swings his webs and beats the game in record time.
Published on 1/19/2016
See full publication history
Game:
Spider-Man
Genres:
Action

Emulator Version:
Bizhawk 1.11.4
Webmasters, please don't link directly to the files. Link to this page or the front page instead.
Republication of movies from this site is only allowed under the following conditions:
Do not label them with speculations. If unsure, ask the site staff for details.