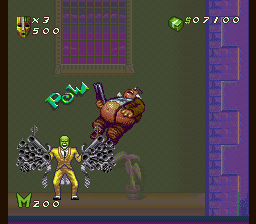 Watch Download (.lsmv)
Author notes Discuss
8.87 / 10 Votes: 20
Based loosely on the plot of the movie of the same name, this game is about a man named Stanley Ipkiss, who finds a powerful mask known as The Mask. However, the evil Dorian Tyrell has also become aware of this and kidnaps his girlfriend in order to obtain it.
One of the traits The Mask seems to give Stanley is extreme speed, so naturally, aside from a couple of boss fights, the gameplay is extremely fast throughout the movie. The Mask also has a variety of special powers, most of which are seen in this run. These powers cost M points to use, which have to be managed carefully over the stage.
BrunoVisnadi improves the previous run by 18.62 seconds, thanks to new glitches and better optimisation. Read the author's comments for more information on the new glitches.
Published on 1/23/2016 12:00 AM
Obsoletes:
SNES The Mask by TASeditor in 05:45.16

Emulator Version:
lsnes rr2-β23
Webmasters, please don't link directly to the files. Link to this page or the front page instead.
Republication of movies from this site is only allowed under the following conditions:
Do not label them with speculations. If unsure, ask the site staff for details.