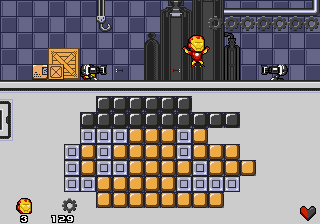 Watch Download (.bk2)
Author notes Discuss
5.75 / 10 Votes: 8
Iron Man is an unlicensed bootleg Genesis game, made by a Russian developer team (best known as the Unknown Russian Developers, said to be known as Kudos or Kudos-Game) and released circa 2014. The same developers have made many bootleg Genesis games based off various licenses, including Mario 3: Around the World, Mario 4: Space Odyssey, Ben 10, and many more.
Noxxa runs through the 120 screens of this game in record time.
Published on 5/5/2016
See full publication history
Game:
Iron Man
Genres:
Platform
Unofficial game