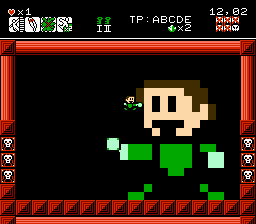 Watch Download (.fm2)
Author notes Discuss
7.5 / 10 Votes: 7
Battle Kid 2: Mountain of Torment is the sequel to Battle Kid: Fortress of Peril and was released in 2012. Inspired from I Wanna Be The Guy and other classic platformers, this game follows the same format of having a large map in Metroidvania style where one has a large map to freely explore and must venture to various parts of it. You always die in one hit (3 hits for easy difficulty), but there are unlimited lives and a password system that allows you to continue where you left off. In total, there are over 650 rooms, 25 enemy types, 13 boss battles, 42 music tracks, and more bonus features this time around.
This time around, Timmy ventures through a mountain base (hence the subtitle "Mountain of Torment") to thwart the villains' plans once more.
fcxiaopengyou collects every item in the game and kills all the bosses on Unfair, the hardest difficulty, in record time.
Published on 6/27/2016
See full publication history
Game:
Battle Kid 2: Mountain of Torment
Genres:
Action
Platform
Unofficial game