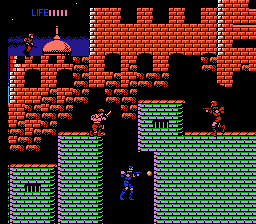 Watch Download (.fm2)
Author notes Discuss
6.34 / 10 Votes: 5
Cross Fire is a 2D Platformer game, developed and published by Kyugo Boueki, which was released in Japan in 1990. It has gameplay somewhat reminiscent of the Contra series, as you control Eric the soldier on his quest to fight evil all over the world.
The player begins armed with grenades and their trusty fists, but soon receives a sub-machine gun to help mow down their enemies. In this run however, MESHUGGAH and RobynS ignore its intended purpose and instead uses the machine gun to hover, pass through walls, and even skip boss fights entirely. Assisted by the world's most determined helicopter pilot, the game is completed in just under 6 minutes.
This run is 3 frames faster than the predecessor movie by MESHUGGAH.
Published on 7/25/2016 12:00 AM
Obsoletes:
NES Cross Fire by MESHUGGAH in 05:52.50