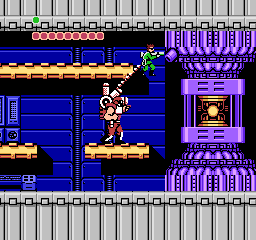 Watch Download (.fmv)
Author notes Discuss
8 / 10 Votes: 1
This is a timeattack at ヒットラーの復活, which is the original (Japanese) version of Bionic Commando.
This is a platform game with a hero that can't jump.
This movie is 3 minutes and 6 seconds faster than the movie of the previous author, Feitclub. It looks really great.
Note: Hitler no Fukkatsu and Bionic Commando are not the same game.
Selected quotes from Feitclub:
"Major differences include:
-"HnF" has more enemies in every stage, and more obstacles along the way. For example, there are land mines in Area 7 and giant spiders in some neutral areas. Also, I believe the patterns of the enemy attack trucks are different, because I seemed to encounter them more often in this game despite using the same route as "BC."
-All references to Nazis and all swastikas were removed from "BC." The evil leader of "the Badds" was re-named "Master-D." Graphically, however, he is undeniably Adolf Hitler in both versions. This resulted in quite a shock to me as a child!"
Published on 5/29/2004 12:00 AM
Obsoletes:
NES Bionic Commando by feitclub in 17:10.70