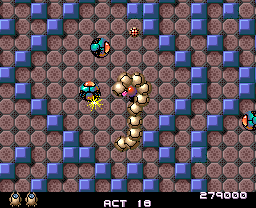 Gomola Speed is an action/puzzle PC Engine game, released in 1990 in Japan by UPL. Its gameplay is described as a cross of Snake, Flicky, Qix, and Gauntlet - you control a cyber-worm's head, have to collect segments to increase your worm's length, use it to encircle spheres of "food", and then reach the exit while dodging enemies along the way. This is done over the course of 25 Acts which throw several kinds of enemies, mazes, keys, power-ups, and bosses into the mix.
Noxxa completes the 25 Acts in record time. Please read the author's comments for more details.
Published on 11/9/2016 12:00 AM
See full publication history
Game:
Gomola Speed
Genres:
Action
Puzzle

Emulator Version:
BizHawk 1.11.7
Webmasters, please don't link directly to the files. Link to this page or the front page instead.
Republication of movies from this site is only allowed under the following conditions:
Do not label them with speculations. If unsure, ask the site staff for details.