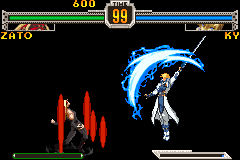 Watch Download (.bk2)
Author notes Discuss
3.3 / 10 Votes: 6
Guilty Gear X: Advance Edition is a port of Guilty Gear X to the Game Boy Advance, itself a sequel of Guilty Gear, and is also a 2D fighting game. There are now 16 characters available for you to choose. The battle system became more complicated, thanks to the variety of moves you can perform. Beside special attacks which you can execute if you build up your Tension Gauge by attacking or advancing towards your opponent, there is also a variety of defensing moves to perform. The instant kill moves are back from the previous game.
Spikestuff improves upon the previous publication by 00:14.75 seconds, with the use of Zato over the previously used Ky Kiske.
Published on 12/11/2016
Obsoletes:
GBA Guilty Gear X: Advance Edition by Spikestuff in 04:12.41