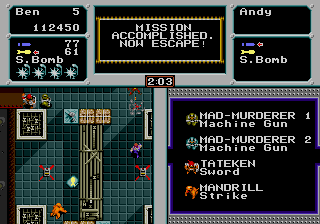 Watch Download (.bk2)
Author notes Discuss
7.33 / 10 Votes: 1
Crack Down (クラックダウン) is a run and gun arcade game originally released by Sega in 1989, and ported to the Sega Mega Drive/Genesis in 1990.
The two heroes, Ben and Andy, have to get through the levels as quickly as possible placing bombs on X marks scattered around the levels. Although the levels are heavily defended, the player has an array of weaponry including a cannon, machine gun, and superbombs.
This game also features some neat music.
Published on 12/31/2016
See full publication history
Game:
Crack Down
Genres:
Action
Shooter