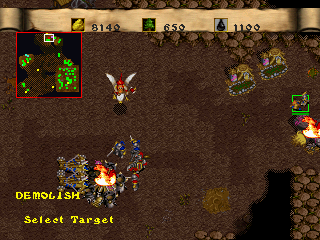 Watch on YouTube
Author notes Discuss
7.08 / 10
Published on 1/24/2017
Electronic Arts brings Blizzard's best-selling strategy game to the PlayStation and Saturn in this release. They've combined all the missions from Warcraft II: Tides of Darkness and its expansion pack, Beyond the Dark Portal, into one package.
You take charge of either the humans and elves or the orcish hordes for control of the lands of Azeroth. Eventually you work through the dark portal and into the orcs' homeland. You take charge of either side as you work through more than 20 missions per side in the fight for survival.
New features for the console release include an auto-build option, where you can set a queue of units to be produced and the ability to select sixteen units at a time instead of the PC's nine.
This run by Flip plays through the Humans' Beyond the Dark Portal campaign.
For a run of the Orc Expansion by the same author, see this run.
See full publication history
Game:
Warcraft II: The Dark Saga
Genres:
Strategy

Emulator Replay:
PSXjin v2.0.2
Download (.pjm)
Webmasters, please don't link directly to the files. Link to this page or the front page instead.
Republication of movies from this site is only allowed under the following conditions:
Do not label them with speculations. If unsure, ask the site staff for details.