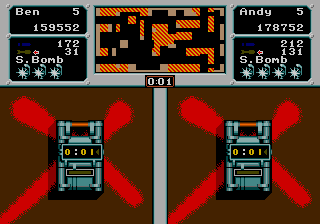 Watch Download (.bk2)
Author notes Discuss
5.67 / 10 Votes: 2
Crack Down (クラックダウン) is a run and gun arcade game originally released by Sega in 1989, and ported to the Sega Mega Drive/Genesis in 1990.
The two heroes, Ben and Andy, have to get through the levels as quickly as possible placing bombs on X marks scattered around the levels. Although the levels are heavily defended, the player has an array of weaponry including a cannon, machine gun, and superbombs.
This game also features some neat music.
This run has Arcree controlling both players in order to beat the game as fast as possible. We also have a 1 player run available, also by Arcree, showing how fast the game can be beaten with only a single player.
Published on 2/14/2017
See full publication history
Game:
Crack Down
Genres:
Action
Shooter