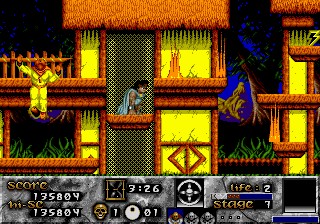 Watch Download (.gmv)
Author notes Discuss
6.87 / 10 Votes: 3
Risky Woods is a computer game developed by Dinamic Software and Zeus Software, and published by Electronic Arts in December 1992. The game has a side-scroll view, and a fantasy theme. It was also released as Jashin Draxos in Japan.
The Genesis version of the game is significantly different from the other platforms that it was released on, with changes to the graphics, mechanics, and gameplay.
Published on 2/16/2017
See full publication history
Game:
Risky Woods
Genres:
Platform