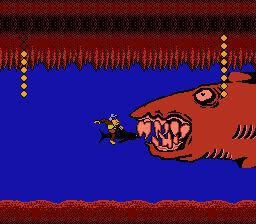 Watch Download (.bk2)
Author notes Discuss
6.39 / 10 Votes: 3
In order to restore his immortal powers, Wazula, an evil Kahuna, is ordered to travel to Hawaii to kidnap Barbi Bikini, who happens to be Thrilla Gorilla's girlfriend. Now, he's off to Africa so he can rescue her.
Town & Country Surf Designs II: Thrilla's Surfari features 7 worlds each containing 5 stages (except for the 1st and 3rd world where each contain only 4 stages). Most of the game involves controlling Thrilla on a skateboard, dodging or jumping over various obstacles and enemies while attempting to get to the end of the stage. Occasionally, he also rides a surfboard or even a shark.
link_7777, using a warp that skips most of 1-3, 1-4 (the boss of the first world) and all of world 2, defeats Wazula and rescues Barbi Bikini in record time.
Published on 4/9/2017
See full publication history
Game:
Town & Country Surf Designs II: Thrilla's Surfari
Genres:
Action

Emulator Version:
Bizhawk 1.10.0
Webmasters, please don't link directly to the files. Link to this page or the front page instead.
Republication of movies from this site is only allowed under the following conditions:
Do not label them with speculations. If unsure, ask the site staff for details.