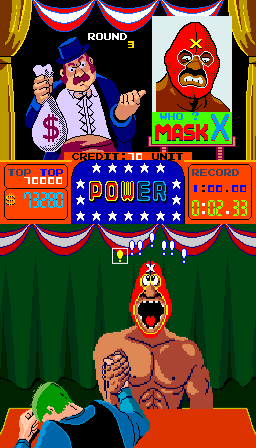 Watch Download (.mar)
Author notes Discuss
6.17 / 10 Votes: 6
Arm Wrestling is a 1985 arcade game developed by Nintendo and released only in North America, and is a spin-off of the Punch-Out!! series. The goal of the game is to become the World Arm Wrestling Champion by defeating as many opponents in arm wrestling as possible. In order to achieve this title the player must compete against five different computer opponents and pin them in a timed match.
£e Nécroyeur causes the host to go bankrupt in record time. Please read the author's comments for more details.
Published on 5/14/2017
See full publication history
Game:
Arm Wrestling
Genres:
Fighting

Emulator Version:
MAME-RR v0.139 v0.1-beta
Webmasters, please don't link directly to the files. Link to this page or the front page instead.
Republication of movies from this site is only allowed under the following conditions:
Do not label them with speculations. If unsure, ask the site staff for details.