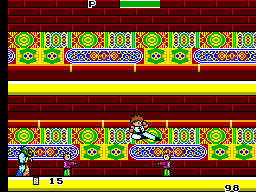 Watch Download (.bk2)
Author notes Discuss
6.49 / 10 Votes: 5
In Kung Fu Kid, the wicked Madanda has awakened from a sleep of several thousand years and it's up to you to fight your way through seven stages of thugs to find and defeat him.
As jumping at the maximum height is the fastest way to move, prepare to see AngerFist and Alyosha jump through this game both gracefully and speedily.
This run makes improvements upon the previous publication, but takes longer due to using the SMS BIOS which is not used in the previous publication. Without the BIOS, this run improves the previous publication by almost a full second.
Published on 7/3/2017
Obsoletes:
SMS Kung Fu Kid by AngerFist in 07:59.55

Emulator Version:
BizHawk 1.13.0
Webmasters, please don't link directly to the files. Link to this page or the front page instead.
Republication of movies from this site is only allowed under the following conditions:
Do not label them with speculations. If unsure, ask the site staff for details.