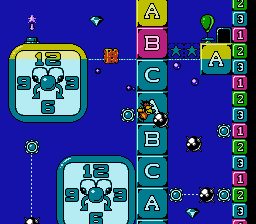 Watch Download (.bk2)
Author notes Discuss
7.14 / 10 Votes: 5
Alfred Chicken is a platforming game created by Twilight Games and released on various consoles, including the NES, in 1993. You play as the titular character Alfred, who must find his way through various levels in order to rescue those kidnapped by meka-chickens.
link_7777 makes his way through the game and rescues everyone in record time.
Published on 7/6/2017 12:00 AM
See full publication history
Game:
Alfred Chicken
Genres:
Platformer
Puzzle

Emulator Version:
Bizhawk 1.12.1
Webmasters, please don't link directly to the files. Link to this page or the front page instead.
Republication of movies from this site is only allowed under the following conditions:
Do not label them with speculations. If unsure, ask the site staff for details.