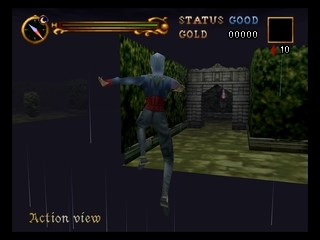 Watch Download (.bk2)
Author notes Discuss
6.85 / 10 Votes: 4
Castlevania: Legacy of Darkness is the sequel to the first Castlevania Nintendo 64 adventure, and was developed and published by Konami in 1999. Although at war with the same enemy in the same castle, the player must fight as 4 different characters, with improved graphics and a new look to certain areas that appeared in the original.
To begin with, set 8 years before the events that took place in Castlevania, the count has kidnapped the young sister of Cornell, a powerful werewolf. As Cornell, the player must battle through the castle and defeat Dracula to save Cornell's sister.
In this run, zoboner beats the game as Cornell as fast as possible.
Published on 8/28/2017 12:00 AM
See full publication history
Game:
Castlevania: Legacy of Darkness
Genres:
Action
Adventure
Platformer

Emulator Version:
Bizhawk 1.13.0
Webmasters, please don't link directly to the files. Link to this page or the front page instead.
Republication of movies from this site is only allowed under the following conditions:
Do not label them with speculations. If unsure, ask the site staff for details.