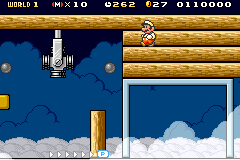 Watch Download (.bk2)
Author notes Discuss
7.6 / 10 Votes: 3
Super Mario Advance 4: Super Mario Bros 3 is a platform video game developed and published by Nintendo for the Game Boy Advance. It is an enhanced remake of the Nintendo Entertainment System video game Super Mario Bros. 3, and is based on the remake found in Super Mario All-Stars for the Super NES.
It contains several enhancements, including the addition of Mario and Luigi's voices by Charles Martinet, a multiplayer mode based on the original arcade game Mario Bros and the ability to scan e-Cards, utilizing two Game Boy Advances, the e-Reader, and a copy of Super Mario Advance 4. Once a card is scanned, it adds certain content to the game.
JeyKey_55 beats every level in the game in record time. For an "all levels" run of the NES game, see this TAS by Lord Tom & Tompa.
Note that this run plays the original European release for the GBA, the e-Reader levels were not present in that version. If you want to see all the e-Reader levels beaten, we have such a movie as well.
Published on 5/16/2018 12:00 AM
See full publication history
Game:
Super Mario Advance 4: Super Mario Bros. 3
Genres:
Platformer

Emulator Version:
BizHawk 2.0.0
Webmasters, please don't link directly to the files. Link to this page or the front page instead.
Republication of movies from this site is only allowed under the following conditions:
Do not label them with speculations. If unsure, ask the site staff for details.