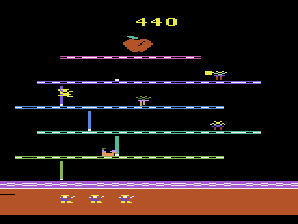 Watch Download (.bk2)
Author notes Discuss
3.62 / 10 Votes: 5
I Want My Mommy is a video game for the Atari 2600, released exclusively to North America. It is a platform game (then called "climbing games" by the US press). The game was given the KidStuff panel on the cover art; meaning it was aimed at gamers under the age of nine. Bootleg versions of the game were sold around the world as Open Sesame, Apples and Dolls, Teddy Apple, and Ursinho Esperto.
The player controls Teddy, and must guide him up a six story structure to the goal at the top. The goal of the first stage is to collect the Apple at the top, and the goal of the second is to get to the mommy at the top.
Published on 8/4/2018
See full publication history
Game:
I Want My Mommy
Genres:
Platform

Emulator Version:
Bizhawk 2.2.1
Webmasters, please don't link directly to the files. Link to this page or the front page instead.
Republication of movies from this site is only allowed under the following conditions:
Do not label them with speculations. If unsure, ask the site staff for details.