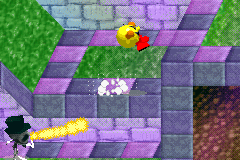 Watch on YouTube
Author notes Discuss
7.42 / 10
Pac-Man World is a 1999 video game for the PlayStation and Game Boy Advance. It was released to coincide with the 20th anniversary, with the character Pac-Man going to a birthday party. A Game Boy Advance version would be released in 2004, with many features removed.
Pac-Man World is a platform game played in 3D graphics that plays heavily into the history of the character; every non-boss level features a maze that plays by the rules of Pac-Man. Every level is littered with Pac-Dots, fruits and ghosts, much of the music is modified from early entries into the series.
Note: The primary movie file for this publication is for an emulator that incorrectly emulates the sounds in the game. The YouTube encode is based off a resynced movie file for a later version of the same emulator that fixes the sounds.
Published on 9/2/2018 12:00 AM
See full publication history
Game:
Pac-Man World
Genres:
Platformer

Emulator Replay:
BizHawk 1.13.2
Download (.bk2)
Additional Downloads:
(Fixed audio (BizHawk 2.6.0))
Webmasters, please don't link directly to the files. Link to this page or the front page instead.
Republication of movies from this site is only allowed under the following conditions:
Do not label them with speculations. If unsure, ask the site staff for details.