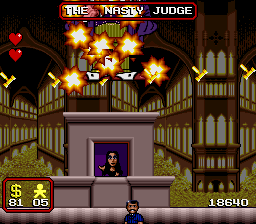 Watch
In a normal playthrough, this game is quite long. You must save four family members then progress to the final area to complete the game.
However, the authors use a glitch to skip directly to the final area, skipping 4/5ths of the game; in addition, several new glitches allow more of the final area to be skipped.
This new movie improves upon the previous record by 00:13.73 seconds thanks not picking a weapon, some new tricks, and better optimization.

SNES The Addams Family "all bosses" by Challenger, EZGames69, GarbiTheGlitcheress in 12:53.39 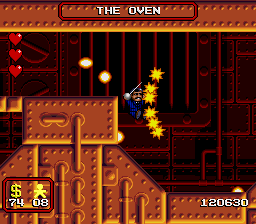 Watch
The Addams Family is a game from Ocean Software released in 1992 for the Super Nintendo and Sega Genesis. It also has a simplified NES port under the name Pugsley's Scavenger Hunt. In this game, it's implied that family members have been captured and are being held hostage by enemies, it's up to Gomez to save them all.
The three authors defeat all the bosses, collecting all health upgrades and saving every family member in record time, which makes for a very creepy, kooky, mysterious, and spooky run.
This run has commentary provided by the authors. They are embedded in the torrents and in the YouTube video.
If you want to see this game beaten in the fastest way, see the any% run.
The baseline tab shows the default movie beating the game as fast as possible without any special conditions.