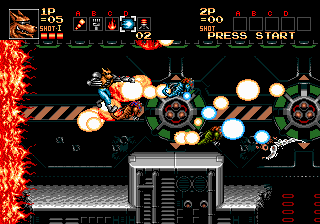 Watch Download (.gmv)
Author notes Discuss
8.09 / 10 Votes: 4
Contra: Hard Corps is the only game of the Contra series released on the Genesis / Mega Drive console. In this game, you get to choose between four characters, each with different abilities and weapons.
This game has four completely different final stages, each with a different ending, depending on the choices you make earlier. This run takes the second quickest path leading to one of these final stages. There are also runs which get the faster secret ending and the best ending.
The Japanese version was chosen because for some reason it gives the players a health bar, allowing them to take some damage without dying.
Fang is used due to a glitch that allows him to deliver fully charged D weapon shots without taking time to charge them.
This movie by Soig beats his old record by 6.87 seconds. To learn more about these improvements, you can read the author's comments.
Published on 12/10/2018
Obsoletes:
Genesis Contra: Hard Corps "1 player" by Soig in 14:07.52