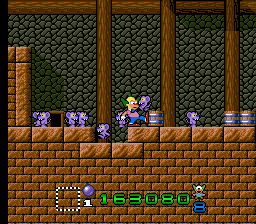 Watch Download (.lsmv)
Author notes Discuss
7.16 / 10 Votes: 6
Krusty's Fun House is a video game based on the cartoon series The Simpsons. It was developed by Fox Williams for the British software house Audiogenic, and released in 1992 for the Amiga, NES, IBM PC, Sega Master System, Sega Game Gear, Game Boy, Super NES and Sega Mega Drive/Genesis. The 16-bit versions on the Super NES and the Mega Drive/Genesis were entitled Krusty's Super Fun House.
The player directs small rats to an extermination area through complicated maze-like levels. The player controls Krusty the Clown, who must create a path for the rats to follow and guide them towards an extermination device.
This is an improvement of 03:16.4 minutes over the previous publication.
Note: This run has been commentated on by the author and some RTA runners, you can watch it here.
Published on 1/15/2019
Obsoletes:
SNES Krusty's Super Fun House by nymx in 1:14:17.01

Emulator Version:
lsnes rr2-B23
Webmasters, please don't link directly to the files. Link to this page or the front page instead.
Republication of movies from this site is only allowed under the following conditions:
Do not label them with speculations. If unsure, ask the site staff for details.