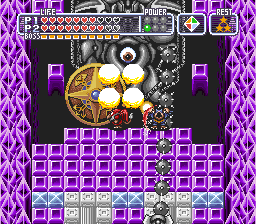 Watch Download (.bk2)
Author notes Discuss
7.53 / 10 Votes: 3
Firestriker is an overhead view action video game that was released on December 17, 1993 in Japan and on October 1994 in North America for the Super Nintendo Entertainment System.
You are a knight charged to save the four kingdoms of the world, except normal weapons are ineffective against the monsters. Instead, you must use your sword to strike a glowing orb called the Trialight like a pinball around the screen. The Trialight is used to destroy enemies and obstacles as you make your way through dungeons.
Published on 6/4/2019
See full publication history
Game:
FireStriker
Genres:
Action