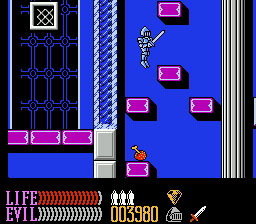 Watch Download (.fcm)
Author notes Discuss
6.69 / 10 Votes: 26
The third game in the Wizards & Warriors series. Having been tricked out of his victory in the previous game, Kuros once again returns to do battle on evil and pretend he will marry every princess he meets.
There is some major sequence-breaking going on in this movie. Only 6 out of the 9 supposedly mandatory quests are cleared, meaning the author has to find original ways of passing obstacles he's not supposed to pass.
The ending of this game is epilepsy-inducing.
This particular movie is an updated version of the second TAS, with Malkil beaten with some magic not even the game programmers knew about.
The first 17 minutes are identical to the previous version, and were played by Ferret Warlord. The Malkil battle was played by Dacicus.
You can also see this run played on a real NES here.
Published on 8/28/2005
Obsoletes:
NES Wizards & Warriors III: Kuros: Visions of Power by Ferret Warlord in 17:53.23