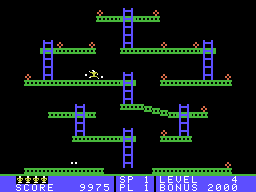 Watch Download (.bk2)
Author notes Discuss
6.73 / 10 Votes: 7.5
Jumpman Junior is a game developed by Randy Glover, who described it as a "lite" version of Jumpman containing 12 levels for users without disk drives. In it, you need to defuse all of the bombs placed on Jupiter by terrorists. To do this, you must climb up ladders, touch the vines, and, of course, jump.
DrD2k9 improved most of the levels from the previous run by route changes and RNG manipulation for a total time save of 00:04.06 seconds.
Note: The character should not be confused with Mario, who was originally named Jumpman. Interestingly enough, Glover cited Donkey Kong as inspiration for this game. It is not known whether the naming is a coincidence or not.
Published on 10/17/2019
Obsoletes:
Coleco Jumpman Junior by BrunoVisnadi in 04:40.42