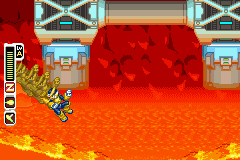 Watch on YouTube
Author notes Discuss
7.75 / 10
The third game in the Megaman Zero subseries takes place two months after its predecessor. It features mostly the same game play as before, but with a different Cyber Elf system and customizable armor. Also new are the Secret Disks, which can be analyzed for information about the series, enemies, items, and the characters.
This run aims to collect all disks, all sub-tanks, and all Ex-Skills. It also gets a special rank when the final stage ends (Disk Capturer) and unlocks Ultimate Mode afterward. Geinuhayst saved 01:22.93 minutes from the previous run by using different Ex-Skills and tricks to allow faster movement and quicker boss fights. See the submission notes for details.
We also have a run that completes the game as quickly as possible.
Published on 4/5/2020 12:25 AM
Obsoletes:
GBA Mega Man Zero 3 "100%" by Rolanmen1 in 1:03:53.15

Emulator Replay:
VBA-rr 23.6
Download (.vbm)
Webmasters, please don't link directly to the files. Link to this page or the front page instead.
Republication of movies from this site is only allowed under the following conditions:
Do not label them with speculations. If unsure, ask the site staff for details.