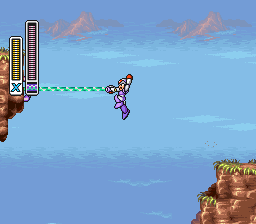 Author notes Discuss
7.61 / 10
Published on 10/1/2005
Mega Man X2 makes a particularly interesting run as many of the weapons can actually be used in mobility, such as a grappling hook, a fast mid-air dash or even a weapon that can make enemies into platforms. The author (FractalFusion) takes special care to ensure that when there is a situation in which a weapon would help him progress quicker, he uses it.
FractalFusion's run is 1:54 faster than blechy's run by using better boss strategies and various route changes, most notably getting the Strike Chain as soon as possible. The importance of a grappling hook cannot be stressed enough.
In order to get the Shouryuken (flame uppercut) which is used towards the end of the movie, the author must first collect 100% of items, such as Heart Tanks, Sub Tanks, and Item Capsules, but not Zero Parts. However, because these powerups are not far out of the way, and because the Shouryuken saves so much time later on, it turns out that this movie may also prove to be as fast as possible.
The page Mega Man X Tricks explains some of the tricks that can be used in the X series games.
Obsoletes:
SNES Mega Man X2 by Blechy in 34:16.97