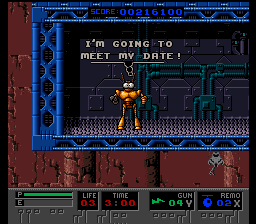 Watch Download (.smv)
Author notes Discuss
3.66 / 10 Votes: 21
On the way to pick up his date, our robotic hero is thrown off course and must fight his way off an alien planet.
Played on the PAL (Europe) version of the game.
No damage is taken except due to a bug in the game where health is lost after the clock runs out due to time being converted into points.
Published on 10/9/2005
See full publication history
Game:
B.O.B.
Genres:
Action
Platform