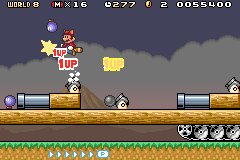 Watch Download (.bk2)
Author notes Discuss
8.06 / 10 Votes: 5
Super Mario Advance 4: Super Mario Bros 3 is a platform video game developed and published by Nintendo for the Game Boy Advance. It is an enhanced remake of the Nintendo Entertainment System video game Super Mario Bros. 3, and is based on the remake found in Super Mario All-Stars for the Super NES.
It contains several enhancements, including the addition of Mario and Luigi's voices by Charles Martinet, a multiplayer mode based on the original arcade game Mario Bros and the ability to scan e-Cards, utilizing two Game Boy Advances, the e-Reader, and a copy of Super Mario Advance 4. Once a card is scanned, it adds certain content to the game.
EZGames69 and GoddessMaria use warp whistles to beat the game in record time.
You can watch the complete run being played back on a console.
Published on 7/22/2020 12:00 AM
See full publication history
Game:
Super Mario Advance 4: Super Mario Bros. 3
Genres:
Platformer