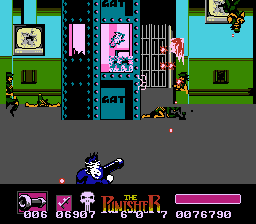 Watch Download (.bk2)
Author notes Discuss
2.73 / 10 Votes: 4
The NES version of The Punisher is an on-rails shooter tracking behind Frank Castle as he trades fire with the gangs of some of his classic enemies. Aside from being one of the few NES rail shooters, the game features an uncommon amount of destructible items in its levels. You also have the ability to move Frank to the left or right of the screen to dodge incoming fire, or to hold down the fire button to lock him in place and move the aiming cursor.
XTREMAL93 completes the game in record time.
Published on 8/21/2020
See full publication history
Game:
The Punisher
Genres:
Shooter

Emulator Version:
Bizhawk 2.4.2
Webmasters, please don't link directly to the files. Link to this page or the front page instead.
Republication of movies from this site is only allowed under the following conditions:
Do not label them with speculations. If unsure, ask the site staff for details.