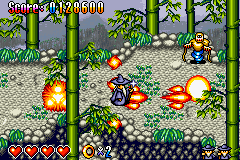 Watch Download (.bk2)
Author notes Discuss
7.4 / 10 Votes: 4
Mo Jie Qibing (魔戒奇兵 "Lord of the Rings") is a bootleg action game developed by Taiwanese bootleg game developer Vast Fame and released in 2003. It is a top-down shooting game in the vein of Pocky & Rocky - in fact, it even uses the engine from Kiki KaiKai Advance (known as Pocky & Rocky with Becky in the US), which Vast Fame are rumored to have obtained legitimately from its developers. This game's US release was translated as The Lord of the Rings: The Return of the King, but the movie scenes that appear before each stage are captured from The Fellowship of the Ring.
Players take control of their favorite The Lord of the Rings character analog (Alice, Glenda, Jerry, Shredder, or Roger), and shoot their way through 8 enemy-infested locales (such as a desert full of cacti) that bear little resemblance to any place in the source material that the game is ostensibly based on. Each world has 1 or 2 stages, and ends with a boss fight.
Watch as Noxxa blazes through the game on hard mode with record-setting alacrity, using the fire-flinging wizard Glenda for his slow-moving secondary projectiles that shred bosses. Both the camera and luck are manipulated in this run to get to the final encounter with Sauron (?) as quickly as possible - see the author's notes for a detailed breakdown.
Published on 9/28/2020 12:00 AM
See full publication history
Game:
Mo Jie Qibing
Genres:
Shooter
Unofficial game