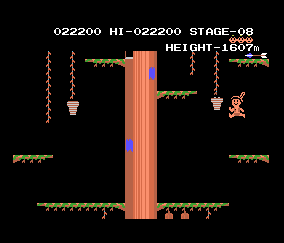 Watch Download (.bk2)
Author notes Discuss
5.77 / 10 Votes: 4
A little Native American boy was separated from his family and he needs to find his way back home. Home just happens to be situated on top of a 2000-meter tall tree, so a bit of climbing is involved.
Magical Tree is a vertical platforming game, originally developed by Konami for the MSX and released in 1984. It was later ported and released in Taiwan for SG-1000 by Aaronix.
Published on 10/30/2020 12:00 AM
See full publication history
Game:
Magical Tree
Genres:
Platformer