A little Native American boy was separated from his family and he needs to find his way back home. Home just happens to be situated on top of a 2000-meter tall tree, so a bit of climbing is involved.

Magical Tree is a vertical platforming game, originally developed by Konami for the MSX and released in 1984. It was later ported and released in Taiwan for SG-1000 by Aaronix.
The objective of the game is to scale a 2000-meter tall tree, divided into 9 stages which are further divided into two or four sub-sections, alternating between having the tree in the middle, or having the tree split into the sides. Either way, the stages are filled with tree branches, vines, and ladders to climb upwards - and various enemies such as owls, snakes, bagworms, or angry lightning clouds which knock the player character down.
Controls are pretty straightforward - actions the player can do include:

As much as the game is mechanically very simple, TASing it still turned out to be an enormous pain. The reason for this is that the constant variation in stage layout, combined with the various forms of vertical movement, means that there are tons of different possible routing options, and often which route is fastest over a certain section isn't immediately self-evident. This means that there are tons upon tons of routes that needed to be tried out and compared, and underneath that rerecord count lay hundreds if not thousands of small alternate routing options that wound up being just that little bit slower and didn't make it into the final product.
Other little tidbits about navigating all the mazes and branches: 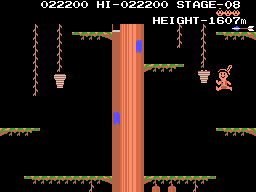 Thanks for watching!
arkiandruski: Judging.
Optimization looks good.
While the game loops, it does come to a satisfying ending on each loop, similar to Donkey Kong. Since this site accepts single loop runs on Donkey Kong, it should be fine with this movie as well.
Audience reaction has been middling. There are no obvious glitches or surprising techniques being used beyond really clean gameplay. The things that are really impressive about the TAS, like luck manipulating enemies out of the way, are not really apparent to the untrained eye.
Accepting to Vault.
feos: Pub.

Joined: 7/20/2011
Posts: 312
When I saw the graphics of this game I didn't have high hopes for it honestly. However it was more entertaining than I thought since optimizing the routes doesn't seem as easy as the game looks. It was a somewhat short game too, so all-in-all I found it pretty entertaining, especially for a game from 1984 for a system that doesn't have much going for it IMO. I voted yes.
Current thoughts: Hachiemon (J) for GBA.
Posted: 9/27/2020 1:00 PM
Quote

Joined: 1/24/2018
Posts: 168
Location: Stafford, NY
Good video, but I'm wondering if the game keeps getting harder on subsequent loops. I found an old YouTube video of the MSX version and someone posted the following comment on it: It really should be checked if this also applies to the SG1000 version of the game.
<- Why I don't have any submissions despite being on the forums for years now...
Posted: 9/27/2020 8:30 PM
Quote

I checked a bit, and the only difference as far as I could tell in subsequent loops is that enemies appear to spawn faster/more often, in particular owls and snakes spawning from tree holes. They can still be manipulated out of the way fairly easily, though. Stage layouts and bagworms don't seem to change.
http://www.youtube.com/Noxxa (formerly known as Mothrayas) <dwangoAC> This is a TAS (...). Not suitable for all audiences. May cause undesirable side-effects. May contain emulator abuse. Emulator may be abusive. This product contains glitches known to the state of California to cause egg defects. <Masterjun> I'm just a guy arranging bits in a sequence which could potentially amuse other people looking at these bits <adelikat> In Oregon Trail, I sacrificed my own family to save time. In Star trek, I killed helpless comrades in escape pods to save time. Here, I kill my allies to save time. I think I need help.
Posted: 10/30/2020 3:10 PM
Post subject: Movie published
Quote