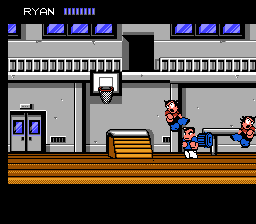 Watch Download (.fm2)
Author notes Discuss
8.22 / 10 Votes: 6
In River City Ransom, Alex and Ryan face off against gangs of students and evil bosses to win their town back and rescue their girlfriends. Several bosses need to be found and beaten before you can enter River City High and beat up the final bad guys (including an obvious imitation of the Double Dragon heroes). The gameplay also has elements of an RPG, where you can level up your character with shop purchases, but none of that is done here.
This is a run that only uses Ryan, who is normally Player 2. This has some very important differences compared to the two-player speedrun. One cutscene is significantly shorter when playing only as Ryan. There is less lag, though there are also fewer glitches and acrobatics. More boss fights, especially at the end, use the boss's superior strength against him, taking advantage of an exploit with kicking trash cans. For more details, see the run's submission comments.
willbobsled improved the predecessor movie by 4.70 seconds.
For a River City Ransom movie that concentrates more on goofing around than aiming purely for speed, click here.
Published on 12/3/2020
Obsoletes:
NES River City Ransom "1 player" by Chamale in 05:19.16

Tags:
One player in a multiplayer game
Uses death to save time
Takes damage to save time
Uses easiest difficulty