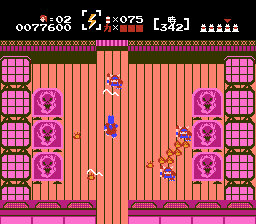 Watch Download (.bk2)
Author notes Discuss
7.48 / 10 Votes: 4
The Mysterious Murasame Castle, also known as its original Japanese release title Nazo no Murasamejou, is a Famicom Disk System game developed by Nintendo EAD and published in 1986, only two months after The Legend of Zelda which it bears some similarities to. The story takes place in Edo period Japan. The titular Murasame Castle is taken over by a mysterious alien creature, who extends its power to four other neighboring castles. The daimyō lords of each castle are each given an evil sphere of power, and they use this power to summon armies of ninja and monsters to terrorize the nearby villages. Shōgun Tokugawa Ietsuna sends out samurai apprentice Takamaru to investigate the castles, defeat each castle lord along the way, and stop the aliens.
J.Y and BakuLuLU defeats said alien creature and restores peace to the region in record time, saving 5.30 seconds from the previous movie. in the process!
Viewers who have photosensitivity problems may want to avoid watching as there's a high amount of flashing visuals after defeating the final boss fight which can become uncomfortable to watch.
Published on 6/7/2021
Obsoletes:
FDS The Mysterious Murasame Castle by Noxxa in 09:55.05

Emulator Version:
BizHawk 2.6.1
Webmasters, please don't link directly to the files. Link to this page or the front page instead.
Republication of movies from this site is only allowed under the following conditions:
Do not label them with speculations. If unsure, ask the site staff for details.