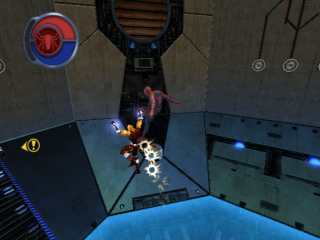 Watch Download (.dtm)
Author notes Discuss
8.57 / 10 Votes: 2.5
Just like its predecessor, Spider-Man 2 is based on the 2004 movie of the same name, featuring Tobey Maguire as Peter Parker and Alfred Molina as Otto Octavius. It was the first open-world superhero game, and had brand new physics-based web swinging.
The game expands the plot of the film, where the player web-slings and crawls through a virtual New York. Hero points advance the plot and can be collected by doing good deeds and beating up bad guys.
Natetheman223 web-slings through the game as fast as only a spider can, collecting just enough hero points to complete the story and dispatching villains at record speeds. Some Shocker fights are skipped entirely by pre-damaging him to near-death.
Published on 7/8/2021
See full publication history
Game:
Spider-Man 2
Genres:
Action

Emulator Version:
Dolphin 5.0-10497
Webmasters, please don't link directly to the files. Link to this page or the front page instead.
Republication of movies from this site is only allowed under the following conditions:
Do not label them with speculations. If unsure, ask the site staff for details.