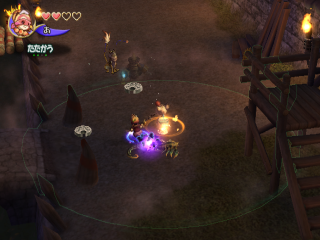 Watch Download (.dtm)
Author notes Discuss
5.02 / 10 Votes: 1.5
Final Fantasy: Crystal Chronicles is an action role playing game developed by The Game Designers Studio and published by Square Enix in 2003 for the Nintendo GameCube. This was the first Final Fantasy game to include real-time fighting, which has since become a staple of Final Fantasy games.
You control a caravan and its members, and travel in a hostile world with dungeons and monsters. You collect drops of Myrrh to protect your village, and go on a quest to find and destroy the source of the miasma that corrupts the world.
Wobmiar further improves on their previous movie's record by by opting not to craft the Master's weapon early on and instead go for the Valiant Weapon, which saves some item farming time and allows the first trip to Marr's Pass to be completely skipped.
Note that this movie was done on a newer version of Dolphin (than the previous run) that has longer and more accurate load times. As a result, this movie's time appears to be slower than the previous run, but is actually faster when load times are discounted.
Published on 8/12/2021
Obsoletes:
GC Final Fantasy Crystal Chronicles by Wobmiar in 1:35:43.08

Emulator Version:
Dolphin 5.0-14445
Webmasters, please don't link directly to the files. Link to this page or the front page instead.
Republication of movies from this site is only allowed under the following conditions:
Do not label them with speculations. If unsure, ask the site staff for details.