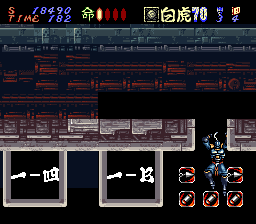 Watch Download (.lsmv)
Author notes Discuss
7.78 / 10 Votes: 4
Hagane: The Final Conflict is a 1994 action-platform video game developed by CAProduction and published by Red Entertainment and Hudson for the Super Nintendo Entertainment System. The player takes on the role of a ninja cyborg named Hagane on his path to take revenge on an opposing ninja faction. The game combines traditional Japanese ninja and samurai aesthetics with a futuristic setting. The player has a wide variety of weapons, moves, and attacks at their disposal to defeat enemies and progress through the game.
In this run, Sniq uses a hidden warp room found in 2-2 that would normally be accessed using a NTSC-J exclusive config menu code, but instead through the use of screen clipping to access the game's final level.
Published on 8/25/2021 12:00 AM
See full publication history
Game:
Hagane
Genres:
Action
Platformer

Emulator Version:
lsnes RR2-B24
Webmasters, please don't link directly to the files. Link to this page or the front page instead.
Republication of movies from this site is only allowed under the following conditions:
Do not label them with speculations. If unsure, ask the site staff for details.