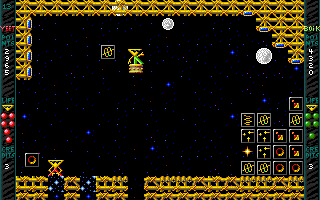 Watch Download (.ltm)
Author notes Discuss
5.16 / 10 Votes: 4.5
Boppin' is a puzzle game developed by Accursed Toys and published by Apogee from 1994. The heroes, Yeet and Boik, notice one day that their arcade games have no monsters, and find out that Hunnybunz has taken them all away in his attempt to create a pure, anodyne world free of anything that could be perceived as controversial. Yeet and Boik set off to free these monsters at the behest of other video game heroes, because what else would they do if there was nothing to fight against?
This game was somewhat controversial in its time. The original version had disturbing animations when the players got a game over, but later versions had to have them activated by a command line parameter. Boppin' is also known for its bizarre imagery and its numerous religious and political references.
slamo completes the first episode with two players in record time.
This is the first DOS publication that uses PCem (via libTAS) instead of JPC-RR.
Published on 9/13/2021
See full publication history
Game:
Boppin'
Genres:
Puzzle

Emulator Version:
libTAS 1.4.2, PCem v17+st-1
Webmasters, please don't link directly to the files. Link to this page or the front page instead.
Republication of movies from this site is only allowed under the following conditions:
Do not label them with speculations. If unsure, ask the site staff for details.