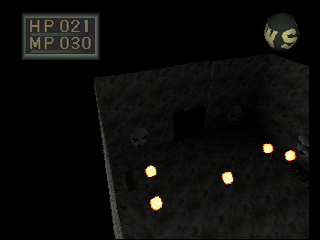 Watch Download (.bk2)
Author notes Discuss
6.64 / 10 Votes: 3.5
King's Field, is an action RPG developed by From Software (best known for the Dark Souls series) for the PlayStation. It is a first-person 3D action role-playing game with heavy emphasis on dungeon crawling. The game takes place in world consisting of interconnected areas, which gradually open up as the player acquires keys and other means to enter them. Most of the time the player is free to explore large areas, though he may encounter powerful enemies he is yet unable to defeat.
lapogne36, abusing an out-of-bounds glitch, defeats the dragon in record time.
Published on 12/8/2021
See full publication history
Game:
King's Field
Genres:
Action
RPG

Emulator Version:
BizHawk-2.3.2
Webmasters, please don't link directly to the files. Link to this page or the front page instead.
Republication of movies from this site is only allowed under the following conditions:
Do not label them with speculations. If unsure, ask the site staff for details.