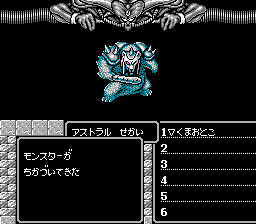 Watch Download (.bk2)
Author notes Discuss
4.8 / 10 Votes: 1
Might and Magic Book One: The Secret of the Inner Sanctum (also known as simply Might and Magic) is an early role-playing video game, first in the popular and influential Might and Magic franchise. It was released in 1986 as New World Computing's debut, ported to numerous platforms and re-released continuously through the early '90s.
This movie uses the Japanese version of the game, which doesn't have the item glitch that allows you to skip most of the game.
katsuster improves on their previous run of the game by 4:37.77 minutes by using the Magic Boost Fountain for free transportation magic, and more optimized key inputs including sub-frame inputs for skipping messages.
Published on 12/21/2021
Obsoletes:
NES Might and Magic by katsuster in 18:43.92

Emulator Version:
BizHawk 2.6.3
Webmasters, please don't link directly to the files. Link to this page or the front page instead.
Republication of movies from this site is only allowed under the following conditions:
Do not label them with speculations. If unsure, ask the site staff for details.