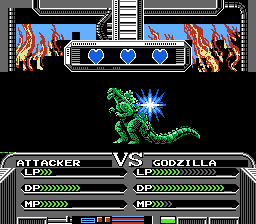 Watch Download (.bk2)
Author notes Discuss
4.25 / 10 Votes: 4
Godzilla 2: War of the Monsters is a strategy game published by Toho in 1992. It consists of 12 missions, where human war units fight the various monsters from the Godzilla franchise, most notably Godzilla and Mothra.
juef completes all 12 missions in record time. It should be noted that the current unassisted record is over 5 hours long.
Watch this run being played back on a real console.
Published on 1/16/2022 12:00 AM
See full publication history
Game:
Godzilla 2: War of the Monsters
Genres:
Strategy

Emulator Version:
BizHawk 2.7
Webmasters, please don't link directly to the files. Link to this page or the front page instead.
Republication of movies from this site is only allowed under the following conditions:
Do not label them with speculations. If unsure, ask the site staff for details.