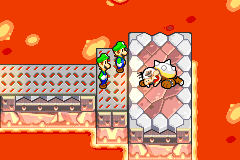 Watch on YouTube Watch on YouTube
Author notes Discuss
7.64 / 10
Published on 1/18/2022
Mario & Luigi: Superstar Saga is a role-playing video game developed by AlphaDream and published by Nintendo for the Nintendo Game Boy Advance in 2003.
The game follows Mario and Luigi and Bowser as they travel through Beanbean Kingdom in order to restore Princess Peach's voice from the clutches of Cackletta.
In this movie, Potato defeats all of the major bosses in the game in record time.
Viewers who have photosensitivity problems may want to avoid watching as there's a high amount of flashing visuals from 45:22 onwards due to the glitches that are performed and it can become uncomfortable to watch. There is an alternative encode which attempts to make these visual glitches less intensive by disabling layers. https://www.youtube.com/watch?v=BVLId2OwPME
See full publication history
Game:
Mario & Luigi: Superstar Saga
Genres:
RPG

Emulator Replay:
BizHawk 2.4
Download (.bk2)
Webmasters, please don't link directly to the files. Link to this page or the front page instead.
Republication of movies from this site is only allowed under the following conditions:
Do not label them with speculations. If unsure, ask the site staff for details.