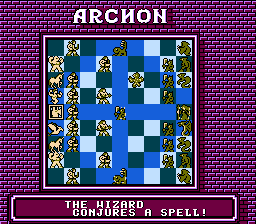 Watch Download (.bk2)
Author notes Discuss
4 / 10 Votes: 2
Archon: The Light and the Dark is Battle Chess to the extreme. Instead of just capturing the opponent's piece upon confrontation, the two pieces are placed in a "combat arena" in which they must fight to the death. The game is won when either all of the opponent's pieces are defeated or all five Magic Squares are held at once.
ShesChardcore uses the latter to complete the game and does it 9.12 seconds faster by skipping a fight done in the previous run. For more details, you can read the submission notes here.
Published 9 days ago
Obsoletes:
NES Archon: The Light and the Dark by MESHUGGAH in 01:10.00

Emulator Version:
Bizhawk 2.8
Webmasters, please don't link directly to the files. Link to this page or the front page instead.
Republication of movies from this site is only allowed under the following conditions:
Do not label them with speculations. If unsure, ask the site staff for details.